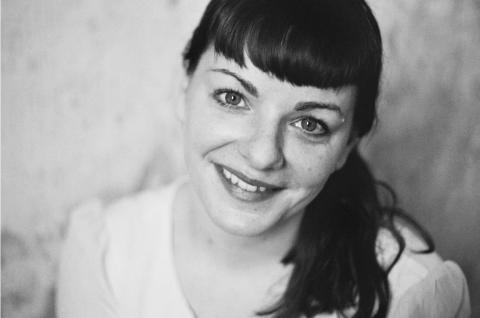 Leonie has studied philosophy, literature and theater in Augsburg, Paris and Pittsburgh, America. She had to learn many languages before she found her own voice, but ever since, writing is her way of dealing with reality. Her work includes - so far - 15 plays, many poems, lyrics for songs and the realization of more than 30 projects as a director. After her studies in 2011, she found her own ensemble in order to create a new vision for the Arts: BLUESPOTS PRODUCTIONS. She is the artistic director, master mind and idea behind every project. Leonie was invited to directors labs in Chicago, Toronto and New York.

In 2014, Leonie got hired to write a play for a planetarium. To start research, she began to go there often, to read about astro physics, quantum mechanics and even when the play (Folie à Deux) was done, she couldn’t stop reading about the universe. She wrote another play for the planetarium (Die Poesie der Physik) which was performed in 2015. Right now, she designs a third project: an interactive adventure for schools and team-building-events (DIE MARS MISSION), which will open in 2017. Furthermore, she started writing a children's book, in which the physical rules of the universe get compared to the rules of dreams and earth. Turns out: dreams and astrophysics have a lot in common. The universe is the most inspiring space to her.

Art is her conciliation with reality.